(venue opens at 7pm for socialising)

Following the AGM, Niels Dahl will deliver the talk:

The historic Mary Kathleen uranium–REE deposit is located between Mount Isa and Cloncurry in northwest Queensland. It was discovered in 1954 and mined for uranium from 1958 to 1963 to supply the British Atomic Energy Authority with about 4,500 t of U3O8 and again from 1976 to 1982 to supply U3O8 to other contracts. The potential for mining REE at Mary Kathleen is now being investigated.

The mineralization is hosted in folded and metamorphosed calc-silicate sedimentary rocks of the Paleoproterozoic Corella Formation and is considered to be of contact metamorphic origin due to its proximity to the Burstall Granite east of the deposit. The Corella Formation is dated at 1780–1760 Ma, the Burstall Granite at 1737 ± 15 Ma, but the ore mineral, uraninite, and an  important phase of hydrothermal activity have been dated at 1550–1500 Ma.

In Niels’ words ‘My visit to Mary Kathleen gave me ideas that differ from the generally accepted theories about the formation of the deposit’. 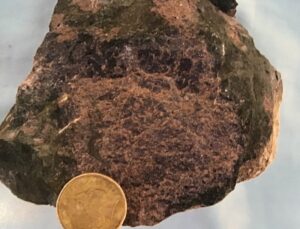 After finishing high school in the town with the most beautiful castle in all of Europe, Frederiksborg Castle, Niels went on to study geology at University of Copenhagen and graduated with a master’s degree. Two weeks later, he set foot in Australia because there was no work for him as a geologist in Denmark or the rest of Europe. There was no work down here either in the aftermath of the nickel boom, which he didn’t know before arriving. After some months of unsuccessful job hunting on the east coast, he secured a job in Perth as a field assistant with Esso Australia in their minerals department, helping to look for uranium deposits (in unconformity setting and granite-associated). The rest is history. His career has been dominantly in exploration all over Western Australia, chasing many different commodities. Assignments in the Northern Territory and South Australia as well as overseas were also completed.

Niels’ interest in Mary Kathleen dates back to his early days in Australia, but he never had an opportunity to visit the site until two years ago. His visit opened his eyes to something completely different from any style of uranium deposit he had explored for earlier in Western Australia and South Australia, or visited in The Northern Territory. Niels believes it is different to anything that has been published about it.