Standing on the shoulders of giants: Mesozoic Insects of Australia

Standing on the shoulders of giants: Mesozoic Insects of Australia

Although the most common perception is that insects are rare in the fossil record, the opposite is actually the case, with more fossil insects described than all fossil tetrapods (amphibians, reptiles, archosaurs, birds and mammals) combined. Unfortunately, insect faunas of the Southern Hemisphere, including those from Australia, are poorly understood when compared to sites in the Northern Hemisphere. Even though the first report of a fossil insect found in Australia was made by Charles Moore in 1870, the documentation of fossil insects on this continent has been hampered by a lack of continuous research by dedicated paleoentomologists, and as a result many fossils are undescribed or are in need of reassessment.

Despite these problems, about thirty insect-bearing fossil localities are now known from Australia; some twenty of which coming from the Mesozoic. Each of the three periods of the Mesozoic preserve a distinctive insect fauna, with the Middle and Late Triassic fauna the best known at present. However, as work continues across the continent, new localities are being recorded and our understanding of this critical period in insect evolution continues to grow. The Mesozoic is of particular interest to paleoentomology as it was an era of intense diversification and innovation, with the origins of the modern insect fauna firmly set in place before the end of the Cretaceous. 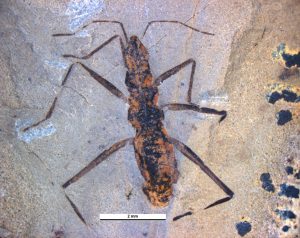 Dr Sarah Martin is a paleontologist working for the Geological Survey of Western Australia (GSWA), a Division of the Department of Mines, Industry Regulation and Safety. Sarah completed a BSc(Hons) in Applied Geology at Curtin University, completing an honours project on Miocene echinoids from the Nullarbor Plain, followed by a PhD at Monash University on a Lower Jurassic insect fauna from the Perth Basin. As part of her role at GSWA, Sarah manages the Survey’s paleontology collection, conducts paleontological research, and manages the State Geoheritage register.